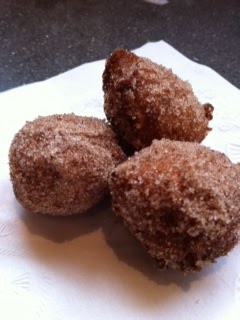 I woke up last Thursday morning with that God-awful donut craving we all get from time to time.  If you don't occasionally get that, please read someone else's blog. When we were in San Francisco, I would have zipped over to Bob's Donut on Polk Street or just sold out for a Krispy Kreme at the Cal-Mart. This being Jackson there are no donut shops and the supermarket donuts - well, I just can't take them seriously. A quick round of recipe searches yielded many easy ones for apple cider donuts, but then of course I had no eggs or buttermilk.  I used applesauce and two tablespoons of oil to compensate for the egg, and then apple cider with a splash of apple cider vinegar in the place of the milk. Necessity breeds invention.Or in this case, total irresponsibility and forgetfulness yielded deliciously crispy vegan donuts in about 15 minutes!

These are closer to a hush-puppy in size with a crispy crust. I must emphasize that if you heat the oil or shortening to the right temperature and keep it there, your donuts will not absorb as much oil as you fear. I just got my Wilton donut pans so will be trying some baked versions in the next few days. However, even if these are gluten-free and vegan, I make no excuses for the fact that they are donuts and that heavenly crispy-fried crust of cinnamon and sugar is what makes them irresistible.

Whisk together the dry ingredients until the xantham and baking powder are in particular well mixed. All the remaining ingredients and stir. It will come together quickly and the batter should be fluffy enough so that you can easily drop spoonfuls into hot oil using two spoons.

Mix the sugar and cinnamon together in a separate mixing bowl and set aside. Lay some paper towels on a baking sheet near your stove.

Heat enough oil or shortening so you have at least an inch of fat in a heavy saucepan. Clip on a thermometer and heat the oil to around 340F. Lower the heat. It is critical to keep the heat between 340-350F. Too hot and the outside of our holes will brown too quickly leaving a raw center. Too low and they absorb too much fat, making them heavy.

Drop by teaspoonfuls into the hot oil. I fry five or six at a time in my 3 quart saucepan. Don't crowd the holes. They might stick together and the temperature of the oil may fluctuate too widely.

Fry for literally one to two minutes in total, turning the holes in the oil so you can an evenly browned crust. Test one so you know the centers are cooked. Slightly overdone is much preferable to the least bit underdone.

Drain the holes and let cool slightly on the paper towels. Gently toss them in the bowl of cinnamon sugar to coat. The hotter they are, the more sugar coating they will take on.

This recipes makes about 15-20 two inch donut holes. They are best eaten right away. They last about five minutes. If you insist on keeping them, it's worth a re-heat in a hot 350F oven for 5 minutes.