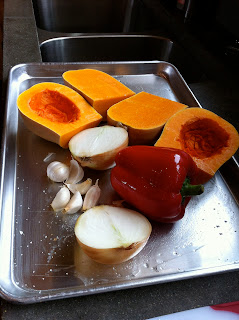 I'm in a soup mood lately, lately as in the past year and a half that we've been living in Jackson Hole. It's the first week of March. While many of you are seeing the tips of spring tulips poking up in your garden beds, we still have four feet of snow on the ground. Don't feel too badly for us. Alex has had 8 straight powder days at the mountain with another storm arriving this morning.

I craved a butternut squash soup, slightly sweet and silky smooth. When I've made this in the past, I've always felt compelled to add a sweetener, such as apples or even maple syrup, or to add curry flavors because otherwise, it just seemed like pureed squash. I lacked confidence in the squash to deliver a full-bodied flavor. I totally underestimated my squash.

In trying to create a dairy-free version, I was losing the rich nutty notes and smooth mouth-feel from the butter and cream. It forced me to really create deep flavors. Also, the grocery store was out of pre-peeled and cut squash which nearly derailed this recipe from the start. Does anyone know how to peel squash without most of the flesh staying on the bullet-proof skin? I would have begun this recipe by sauteing the squash chunks with onions and garlic, but since I had to use the whole thing, I roasted it and here begins the story of my squash soup success!

I split the squash in half, as well as one large yellow onion. There were a handful of unpeeled garlic cloves and one large red bell pepper. I brushed everything with some olive oil and roasted this beautiful Vermeer-esque still life for 45 minutes. The aroma during the last 20 minutes let me know it was going to be delicious, whatever it would end up being.

Once the vegetables have cooled, everything will peel quite easily, the skin of the squash slipping off the soft flesh. Discard the peels and pepper seeds and pith. Throw everything into a pot with at least 4 cups of broth. Add in one inch of peeled fresh ginger to brighten the flavors. Blitz it with a handheld immersion blender.

The silky texture comes from the addition of one can of coconut milk, which heightened the natural sweetness of the butternut more roundly than any sugars. I did strain this soup through a mesh sieve before adding the coconut milk, a step I usually skip (because I'm lazy!), but those miniscule, fibrous bits of ginger would not pulverize completely. I added a half teaspoon of cayenne pepper and 1 teaspoon of ground black pepper to add a little punch and balance out the richness.

Snipped chives makes for a pretty garnish, but this soup really needs no embellishment. It's full of confidence and has great self-esteem. Enjoy.

Cut the squash and onion in half. Place on a baking sheet with the pepper and garlic cloves. Brush everything with the olive oil. Use your hands if you're in that kind of mood. Roast in the oven for 45 minutes. If your garlic cloves are small, you might need to pull them out of the oven earlier.

Once the vegetables have cooled, use your hands to slip all the peels off. Discard the pepper stem, seeds, and pith. Discard all the peels. Throw it all into a large pot and add the broth and ginger. Bring to a boil, then simmer for 20 minutes or until the ginger is fragrant. Use an immersion blender to puree the soup. Strain the soup through a fine mesh sieve if you like. It does result in a much silkier texture. Return the strained soup to the pot and add in the coconut milk, solids and all. Bring back to a simmer and cayenne and black peppers. You can add salt if you like, but I find store-bought stocks are usually well-salted to begin with.

Makes enough for 6-8 hearty lunch portions.
Posted by Joohee at 10:41 AM